Airport busy as supplies fly in, people fly out 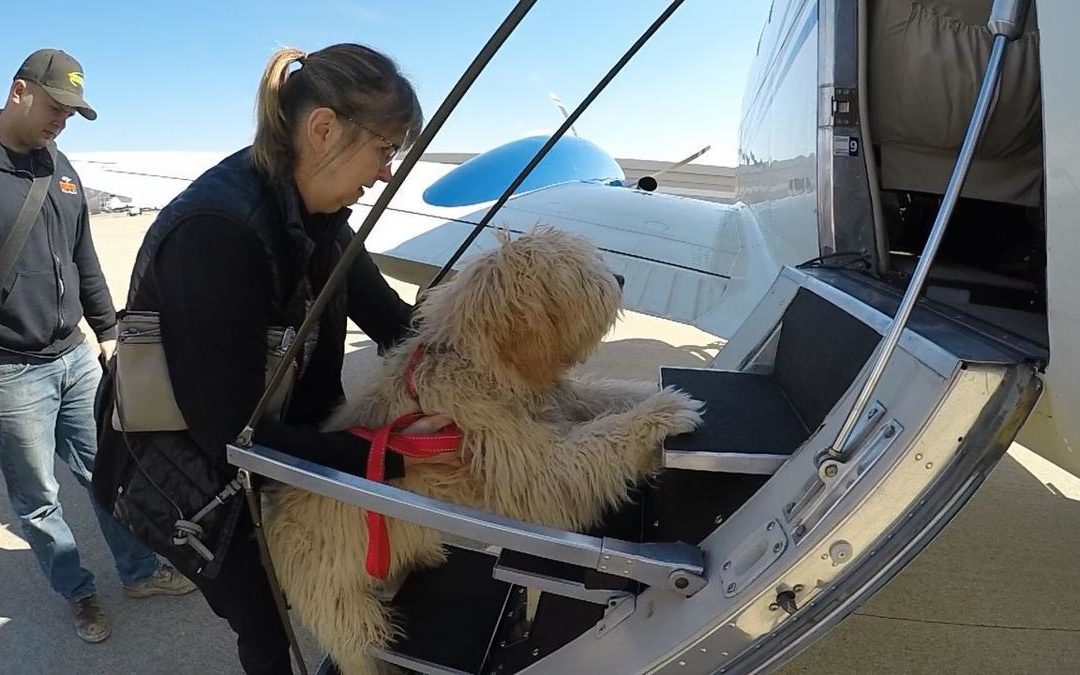 **This article was originally published by the Fremont Tribune on March 18th, 2019

Brooke Ronhovde wanted to get to Lincoln. And on Sunday afternoon, the former Fremonter was among people who filled the Fremont Municipal Airport Terminal. Ronhovde had been in town visiting family during spring break when flood waters covered highways in and out of the city, making them impassable. She and Zach and Erin Ganzel waited quietly for a plane that would take them out of Fremont to the airport in Millard. From there, they would get a ride to Lincoln, where Ronhovde and Zach Ganzel are English Language Learner teachers, who wanted to be ready for Monday morning classes.

Greg Kjeldgaard, vice president of Fremont Aviation, said individual volunteers and outside companies flew an estimated 100 to 200 people out of the city between Friday and Sunday. Fremont Aviation has been coordinating the efforts. “Some were stranded. We’ve had some leave because they were out of medicine,” Kjeldgaard said of those exiting the city. At the same time, supplies such as diapers, toiletries, blankets and baby formula have been flown in from Omaha and Lincoln, he said. Those items are then being trucked to Clarmar Elementary School.

Some of the pilots bringing in supplies, then were taking passengers back with them if seats were available, Kjeldgaard said. Flood-related activity began at the airport on Thursday night, when firefighters’ boats capsized in the Elkhorn River and a Black Hawk helicopter was sent to rescue them. “We fueled the Black Hawk that night,” he said. A couple more Black Hawk helicopters would need to be fueled the next day. Friday also was spent flying people in and out of the city and fueling the airplanes. “We’ve been doing that Friday, Saturday and today,” Kjeldgaard said Sunday afternoon.

Silverhawk Aviation of Lincoln and Advanced Air, Inc., of Council Bluffs, Iowa, flew people in and out of the city during the weekend. Mike Gerdes, Silverhawk president, estimates the company provided about 20 free flights in and out of Fremont, helping approximately 150 people. Some of those passengers had traveled to Fremont for a funeral or work and needed to get home. One group of individuals with mental disabilities had been brought to Fremont for a daylong excursion that turned into a three-day adventure. “They were out for the day on Friday and thought that it was going to be OK, but it was not,” he said. Several passengers were parents separated from younger children. “We flew some kids to their parents in Omaha and we took some parents back into Fremont,” he said. Gerdes commended people in the company. “They’re Nebraskans and when they see a need they wanted to jump at the opportunity to help their friends and neighbors,” he said. “We had all kinds of employees, who were willing to jump in and help. “On our charter team, specifically, a couple of our flight coordinators fields literally hundreds of phone calls and emails and they were taking calls until 3 a.m. this morning,” Gerdes said Sunday. “They had to get a little bit of sleep and then they were starting again by 7 a.m. They’ve been going non-stop.” Gerdes noted that passengers and the public expressed gratitude. The main office has received many calls. Many people also thanked the company via Facebook, he said.

At the airport on Sunday, Lt. Col. Jim Kuddes of the Civil Air Patrol watched as supplies were brought in. “This is the Nebraska version of the Berlin airlift,” he said. “Some pilots have been in and out three or four times, bringing supplies — water, diapers, dog food, a variety of supplies for the shelters here and flying people out to Omaha or Lincoln. It’s been an awesome effort by everybody. We really appreciate all of them.” Kuddes said a Black Hawk helicopter with medical supplies came in from Lincoln. Buffalo Wild Wings and Raising Canes donated food.

In the airport terminal, Ronhovde talked about the importance of getting back to Lincoln and the ELL students. Ronhovde teaches at Clinton Elementary and Ganzel at Kooser Elementary. “They don’t speak English as their first language and so a lot of the time at school, we’re their voice and we’re their routine and we kind of help them know what’s going on,” Ronhovde said. “A lot of them have state testing coming up and that’s really hard and scary for them.” Ronhovde said she and the Ganzels reached Millard and then Lincoln. “It’s going to be nice to be back for my students,” she said. At the same time, it’s hard to be away from Fremont. “I feel like there’s a lot that needs to be done,” she said. But help seems to be coming to Fremont. Ronhovde noted that when the trio landed in Millard, she saw six or eight planes ready to be loaded with supplies or people to go back to Fremont. “It was pretty incredible,” she said. “And they had trailers of bottle water and toilet paper to fly back to Fremont.”